"Even though this project was complex, the team was always there to find solutions. They would listen, discuss and then work on the right solution." Patrick Harrigan (Harrigan Lumber Co., Inc.) 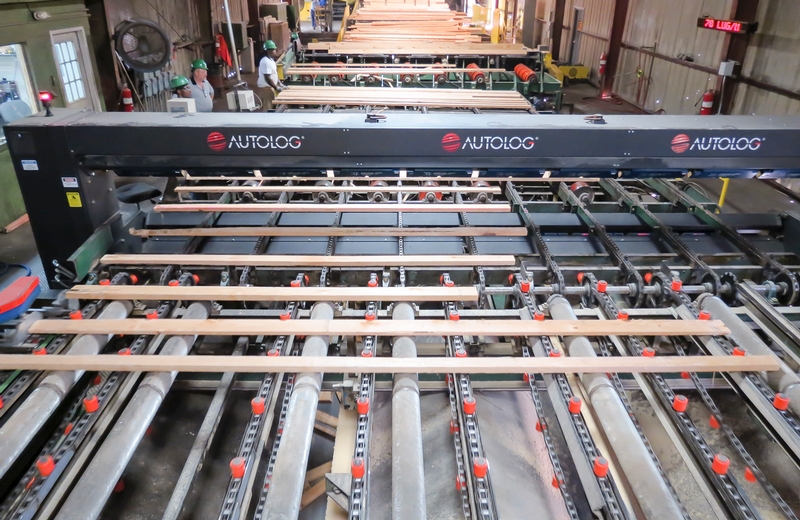 Harrigan Lumber Company, Inc. is a privately owned sawmill company located in Monroeville, AL.  Its complex includes a sawmill, a planer mill, a dry kiln and storage facilities. The mill currently produces approximately 115 million board feet per year in Southern Pine dimension lumber, in lengths up to 20 feet as well as some small timbers. Production varies from 1” x 4” to 2” x 12” including blocks (4” x 6”).

In 2013, the company began their search for new technology to upgrade or replace their existing trimmer optimizer and sorter controls. This exercise proved necessary based on the fact that their existing system was obsolete in terms of technology, including replacement parts that were almost impossible to acquire, thus greatly affecting the reliability and uptime of the trimmer/sorter line.

Top of mind for Harrigan when selecting a supplier is not based solely on the supplier’s reputation from a technology standpoint, but for their partnership approach and methodology. Meaning that the supplier’s active listening and understanding of their concerns would allow for them to adapt or customize a standard solution according to their specific requirements.  Also key was their active presence in the South.

In early 2014 a decision was made and the contract was awarded to Autolog, with a July 2014 start-up.

Part of the decision for the trimmer optimizer was based upon the selection of the sensors. Autolog utilizes Hermary scanners which offer the highest accuracy on the market with 3000 scans/sec and a scan density of ¼”. These sensors are visible class II eye safe laser technology with a 2 year warranty. Autolog’s frame is designed with the scanner heads oriented at 45° relative to the wood flow for better width accuracy.  The accuracy of the sensors eliminates the need for a light curtain for length measurement. What does this mean for the customer? They get a simple and best performing system, with a minimum requirement for maintenance and spare parts.

The concentrator, optimizer and user interface run on the commercial Z series brand from Hewlett-Packard computers.

An additional backup computer was included in this project to further secure data, parameters, tally info and other valuable information.

Autolog has been a leader in transverse optimization for over 20 years. In 2010, the company introduced a new optimization and user interface software with the latest technology. This new system offers the best features based on all their years of experience and commitment to the wood transformation industry.

The project also included the replacement of the existing controls using A-B ControlLogix technology. The old processor was replaced by a top of the line powerful L73 unit. Incorporating standard off-the-shelf components provides the customer with a secured source of supply for a longer period of time (compared to a custom computer based system (black box)). Existing PLC I/O’s cards were reused thus saving Harrigan costly expenses.

With the same supplier providing both the optimization and the controls, Harrigan benefited from a smoother integration and a faster startup period. At Autolog, each system sold is fully tested and must meet severe in-house QC procedures. Startup was performed on time as scheduled.

Challenge in this project:

Autolog had to interface the new systems (trimmer optimizer and controls) to existing mechanical and electrical equipment. The challenge was to configure the systems so that the connections and the communication link between the old and the new equipment were completed quickly and smoothly.

Autolog, with more than 28 years of experience, has the best trained people to face all types of equipment and configuration. They can very quickly customize a standard solution according to their customer’s specific needs.  The start-up was on schedule.

According to Mr. Harrigan, “Even though this project was complex, the team was always there to find solutions. They would listen, discuss and then work on the right solution”.

In conclusion this project is a great success story for both the customer and the supplier.

In the words of Mr. Harrigan: “I would recommend Autolog to anyone searching for a similar optimizer system without any hesitation”.